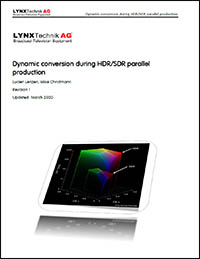 Today’s HDR/SDR parallel productions still follow a similar workflow from that of SDR-only productions. In current workflows, it is not possible to perform “real HDR shading” to create dynamic and brilliant HDR content. In addition, SDR hardly benefits from increased recording quality. Within this article, we will discuss how dynamic conversion can help parallel HDR/SDR productions as well as  the new workflows that can be supported…

An Introduction to Fiber Optic Technology

Most of us in the Broadcast industry are familiar with fiber optic transmission systems and the solutions widely used for broadcast applications. These are typically external applications for moving video signals between distant locations, or hauling distant camera feeds into outside broadcast units. Signal distribution within a facility is typically copper coaxial cable, which has been used in one form or another since the inception of television. However, with the transition to HDTV, video bandwidth increased nearly seven fold from 270Mbit to 1.5Gbit. With the further migration to 1080P, video bandwidth has increased even further to 3Gbit. As bandwidth increases, the reach of copper cable reduces and our copper connected world is shrinking rapidly. Cable lengths have been reduced from 350m (1149 feet) at 270Mbit to 140m (460 feet) at 1.5Gbit, and now it’s down to approximately 70m (230 feet) at 3Gbit. If you allow some overhead for cable routing and emergency patch panels etc. then 70m (230 feet) maximum cable lengths imposes serious issues for facility design and expansion….

An Introduction to CWDM Fiber Technology 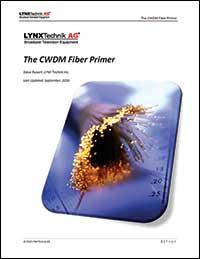 Typically, CWDM is a technology used to transport multiple signals between distant locations over single fiber connections. This leverages the utilization and therefore the relative cost of the long distance fiber cable links. However, with HDTV and the increasing bandwidths required for video production (3Gbit) and new 3D markets rapidly evolving (which makes extensive use of 3Gbit SDI in the production environment) we see fiber connectivity increasingly taking the place of traditional copper (electrical) connections within facilities.  As this evolution continues and more and more dedicated unidirectional “point to point” fiber connections are consumed, then an “in house” CWDM solution is the logical next step to better utilize the facilities existing fiber cable assets.

Today’s modern digital multi-format installations have resulted in the development of an array of new terminal equipment products designed to address the many needs and demands of such systems. Many devices are complex multi-faceted and multi-functional modules with an array of options and configuration possibilities. A comprehensive control system has become an essential component of any modern terminal equipment installation. LYNX Technik has addressed this with a modular and expandable control system. The two primary building blocks of the control system are hardware components in the form of modular rack controllers, and a software application.

This paper explains the concepts behind the LYNX Technik control susyem and shows how to configure and expand the system from a single rack to multiple larger systems located in different physical locations all under central control. 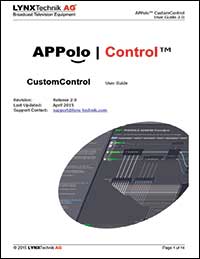 The demand for freely definable Control Panels (i.e. which are not pre-defined by LYNX) is satisfied by LYNX APPolo CustomControl. CustomControl provides a powerful, interactive and intuitive way for setup and deployment of one or more Custom Control Designs. Any number of custom-made designs (dedicated GUI pages) can be prepared for all those different applications and operating situations in a system where only a subset of the full power of the LYNX APPolo GUI shall be exposed. Individual Designs can then be loaded and displayed from various workstations and mobile tablet computers.

AutoControl for APPolo is a radical advancement for infrastructure control and automation. Most facilities use automation yet generally do not have the ability to automate static terminal equipment. AutoControl adds automation and programmable intelligence inside the terminal equipment, which enables automatic reconfiguration of the modules functions, signal routing and internal signal
processing. This opens up an entirely new layer of power and flexibility to automated facility control. 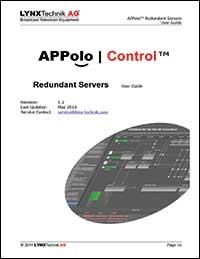 The relationship between analog and digital audio levels. 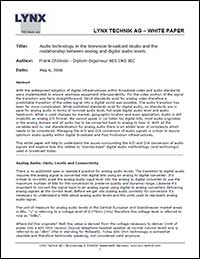 With the widespread adoption of digital infrastructures within Broadcast video and audio standards were implemented to ensure seamless equipment interoperability. For the video portion of the signal the transition was fairly straightforward. Strict standards exist for analog video therefore a predictable transition of the video signal into a digital world was possible. The audio transition has been far more complicated. While published standards exist for digital audio, no standards are in pace for analog audio in terms of nominal audio level, full scale digital audio level and audio headroom. What is used changes by market, geographic location and even application. Audio is still implicitly an analog I/O format. We cannot speak in (or listen to) digital bits, most audio originates in the analog domain and all audio has to be converted back to analog to hear it. With all the variables and no real standardization for analog audio there is an added layer of complexity which needs to be considered. Managing the A/D and D/A conversion of audio signals is critical to assure optimum audio quality within digital broadcast and Post Production infrastructures.

This white paper will help to understand the issues surrounding the A/D and D/A conversion of audio signals and explore how this relates to “standardized” digital audio methodology (and technology) used in broadcast today. 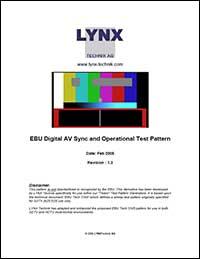 The EBU A/V sync pattern is unique to the Testor and the new Testlor Lite 3G. This is an adaptation of an existing 525 / 625 patterns proposed by the EBU in technical document EBU tech 3305. LYNX Technik has adapted and enhanced this pattern for use in modern multi-format (SDTV and HDTV) environments. The pattern has been designed to address a number of requirements in a modern multi-format digital broadcast facility.

This website uses cookies to improve your experience while you navigate through the website. Out of these, the cookies that are categorized as necessary are stored on your browser as they are essential for the working of basic functionalities of the website. We also use third-party cookies that help us analyze and understand how you use this website. These cookies will be stored in your browser only with your consent. You also have the option to opt-out of these cookies. But opting out of some of these cookies may affect your browsing experience.
Necessary Always Enabled
Necessary cookies are absolutely essential for the website to function properly. These cookies ensure basic functionalities and security features of the website, anonymously.
Functional
Functional cookies help to perform certain functionalities like sharing the content of the website on social media platforms, collect feedbacks, and other third-party features.
Performance
Performance cookies are used to understand and analyze the key performance indexes of the website which helps in delivering a better user experience for the visitors.
Analytics
Analytical cookies are used to understand how visitors interact with the website. These cookies help provide information on metrics the number of visitors, bounce rate, traffic source, etc.
Advertisement
Advertisement cookies are used to provide visitors with relevant ads and marketing campaigns. These cookies track visitors across websites and collect information to provide customized ads.
Others
Other uncategorized cookies are those that are being analyzed and have not been classified into a category as yet.
SAVE & ACCEPT