The Congress offers lectures, workshops and various events on many topics including, but not limited to, information technology, developing critical-creative attitude towards technology, as well as discussions about the effects of technological advances on society.

Electronic Media eV (FeM) is the largest student association of the Ilmenau University of Technology. The association was founded in 1997 and now has about 1,800 members.

FeM and 31C3 video operations team collaborated on the streaming project and built a talented technology team consisting of FeM members from the Ilmenau University of Technology, as well as individuals and members from associations such as the Computer Club e.V. (CCC). The goal was to create an infrastructure for live online streaming of the talks from the event as well as an online knowledge base..

During the 2014 Chaos Communication Congress (December 27-30, 2014), more than 130 presentations were successfully streamed live, and offered as downloads in many different formats shortly after the event. At peak times there were up to 10,000 simultaneous viewers.

Five yellobrik distribution amplifiers distributed signals to decentralized production switchers in the presentation rooms from one source to multiple receivers. The signals included HD-SDI sources and several receivers, such as backup recording devices, central audio control, and on–stage projection screens. Due to long distances within the presentation rooms and from room to room into the central control room, direct SDI connections were not always possible. In addition, in the building itself, there were no HD-SDI connections available. To solve this challenge, six yellobrik Fiber Optic 3Gb / SDI multi-mode Transceivers (supporting multimode) were used. HD signals were transmitted over the existing multi-mode fiber optic cables within the presentation room to the mixers and the backup recorders, as well as over long distances directly into the central control room. LYNX Technik yellobrik audio embedders/deembedders split the audio signals from the presentation rooms and central audio control room. After adjusting the audio signals, the sources were embedded again and fed into the target live stream. 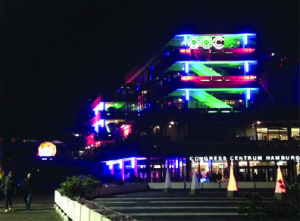 For the first time in the event‘s history, stream encoding in full HD was implemented directly in the four presentation rooms with up to four cameras in each room. The signal transmission between the cameras, mixing and the recording systems was accomplished in HD-SDI using the LYNX Technik yellobrik solutions. The use of hardware video mixers was necessary to ensure the high standards of the 1080i stream. Subtitles were provided by an independent team of volunteers and synchronized to the recordings.

The 31C3 2014 Chaos Communication Congress was a huge success due in part to the distribution, fiber, and audio technology from LYNX Technik AG. The yellobrik solutions interfaced seamlessly with other equipment in the infrastructure including solutions from Hetzner, Selfnet, SysEleven, NetCologne and SpeedPartner,

The philosophy of the FeM association is to support everyone interested in new media, and offers them the possibility of getting their ideas implemented. FeM teams meet with students from all disciplines to organize research groups, all with the goal of making new media tangible to help students broaden their horizons. There are a variety of independent projects born from this initiative. Each project involves a team that deals with electronic media. The possibilities are almost unlimited. Those who want to try the latest technologies first hand, have the option to join an appropriate team.

The motto of the association is: FeM connects. Young people are coming together to be active in new media technologies, and implement their goals together. New members who wish to join the FeM association are always welcome.

More information on FeM can be found at: http://fem.tu-ilmenau.de/index.php?id=31&L=1

More information on 31C3 can be found at: https://events.ccc.de/congress/2014/wiki/Main_Page